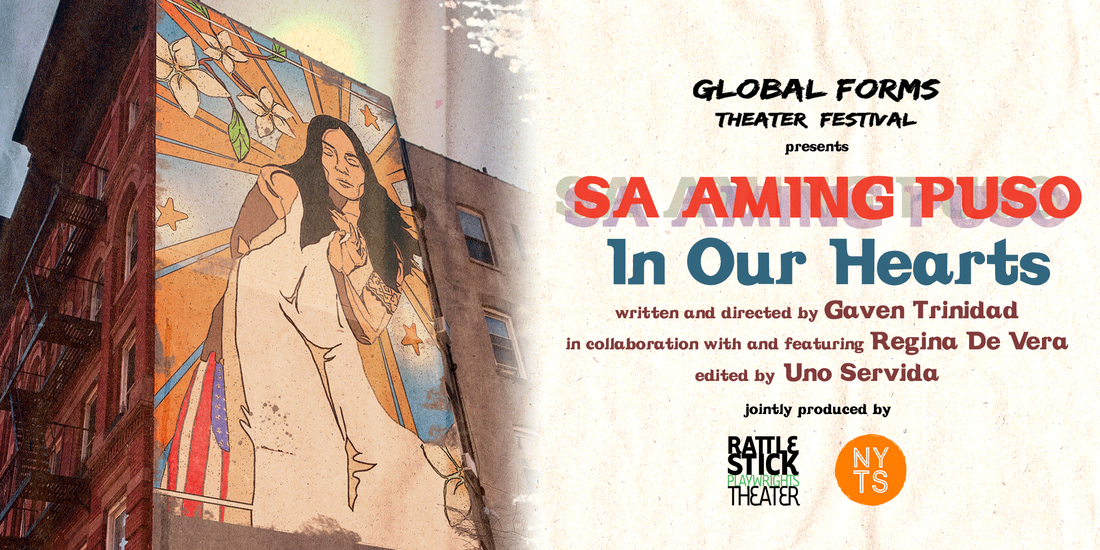 Regina De Vera will be collaborating with Filipino American artists Gaven Trinidad and Uno Servida, on "Sa Aming Puso/In Our Hearts" - their official entry for the Global Forms Theater Festival produced by Rattlestick Playwrights Theater and New York Theatre Salon. Showing dates are on June 3 at 9AM, June 4 at 9PM, June 9 at 6:30PM EDT.

Written and directed by Gaven Trinidad
In collaboration with and featuring Regina De Vera
Translation into Tagalog by Regina De Vera
Film edited by Uno Servida
Featuring original music by Gaven Trinidad, Nanding Josef and Ron Amor
Produced by Jody Doo, Rattlestick Playwrights Theater and New York Theatre Salon
Ma’am Lys, or The Plan originally commissioned by The Sống Collective
Poster Designs inspired by a photo taken by Camille Orense
​
We are in search of the spirit of our people. Where has it gone? Where does it live? In our bones live the history of our ancestors who fought, resisted, and survived centuries of colonial rule by the Spanish, Japanese, and Americans. Somewhere in the reconstruction of ourselves, it seems that we have forgotten something that unites us, all Filipinos from around the world. Using texts from three work-in-progress plays, theatremakers Gaven Trinidad and Regina De Vera openly interrogate the lasting effects of imperialism on contemporary Pilipino identity and what it means to be Pilipino/Filipinx today. The filmed vignettes will explore themes of immigration, belonging, citizenship, decolonization, and the continuous search for what unites all people of Pilipino descent. The project was filmed on location in New York City, and it will be presented in English and Tagalog.
For tickets, visit The Global Forms Theater Festival 2021 page here.
​There is a Talkback with Global Gab after the June 3rd and June 4th performances